by The Tactical Life
in Guns
0

It’s a hard, but oh, so, valuable lesson to learn: Most days the smallest and finest of details make the biggest difference in our angling success.

My grandson, Liam, flew home for March break last weekend, and the first thing he wanted to do was head out and catch some crappies for dinner. It seems he hasn’t enjoyed a fresh fish shorelunch since he was home at Christmas. I guess crappies aren’t featured on the menu at college these days.

So, we rigged up our light-action Tickle Sticks and BLACK BETTY FreeFall reels, spooled with four-pound test Maxima Fluorocarbon line. Liam tipped his with a 1/32-ounce orange and chartreuse VMC TUNGSTEN TUBBY JIG, while I opted for a glow pattern. We tipped them both with 2 1/4-inch MISTER TWISTER SASSY STINGUMS. 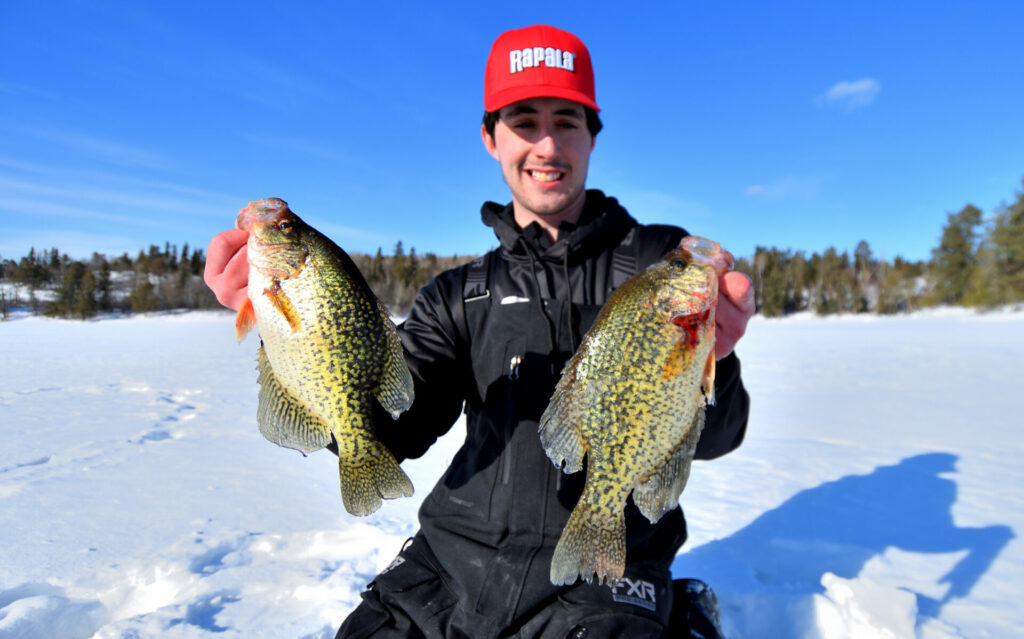 We had to move twice before we finally contacted the fish—there is so much ice, slush and snow on the lakes right now, that we also needed an extension on the ION electric auger—but when we found them, they were super aggressive. I know I’ve said this before, but it never ceases to amaze me how crappies can spot such a small lure clearing the bottom of a hole and become so excited. I mean, the nano-second our jigs started sinking, the fish were rising up quickly to intercept them from 20 or more feet below. How they see it under more than four feet of ice and snow in such dark conditions is astonishing.

When the crappies rush up this way, too, they are usually “gimmes”. But several times we followed them on our HELIX ICE 7 CHIRP units, and as soon as they intercepted our falling bait and we stopped it, the fish hit the brakes, hovered beside the lure, and would not bite. If it was the first time we’d seen this behaviour we’d still be there scratching our heads and wondering what was going on. But it’s a super common occurrence—especially with crappies—so we reeled up quickly and readjusted our jigs.

What happens, especially when the big slab-sided beauties are so aggressive, is that when you hook one it will smack your lure so hard that it will pull the knot from on top of your jig and repositioned it more towards the nose. And if you don’t remember to put the knot back into place when you drop back down, your jig will be dangling vertically, instead of hanging horizontally.

And if you don’t think this detail is important, well, let your partner reposition their knot back to horizontal after they land each fish, while you present your jig lopsidedly. You’ll pull out your hair and surrender in quick order.

Source
Panfish look but won’t bite? Make this super-easy adjustment to your jig • Outdoor Canada is written by Gord Pyzer for www.outdoorcanada.ca

Are You A Good Fisherman? Take This Test and Find Out! — Ron Spomer Outdoors

Are You A Good Fisherman? Take This Test and Find Out! — Ron Spomer Outdoors